The Turkish domestication of the chickpea.

One of the neolithic farmers founder crops. 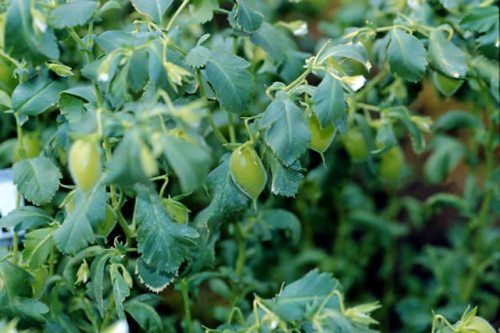 Chickpeas (Cicer arietinum) are large roundish legumes, that look rather like a large round pea with an interesting bumpy surface. A staple of Middle Eastern, African and Indian cuisines, domesticated chickpeas (also called garbanzo beans) come in two main groups called desi and kabuli, but you can also find varieties in 21 different colors and several shapes. The wild version of chickpeas (Cicer reticulatum) is only found in parts of what is today southeastern Turkey and adjacent Syria, and it is likely that it was first domesticated there, about 10,500 years ago. Chickpeas store really well, and are high in nutritive value, and were part of the farming culture that grew out of the Neolithic of the Fertile Crescent.

Domesticating Chickpeas
There are some interesting features about the domestication of chickpeas that were pointed out in a 2007 article by Zohar Kerem and colleagues at the Hebrew University of Jerusalem’s Faculty of Agricultural, Food and Environmental Quality Sciences. The wild form of chickpea ripens only in the winter, while the domesticated form can be sown during the spring for summer harvest. Chickpeas grow best in winter when there is adequate water available; but during the winters they are susceptible to Ascochyta blight, a devastating disease which has been known to wipe out entire crops.

In addition, according to recent studies, the domesticated form of chickpea contains nearly twice the tryptophan of the wild form, an amino acid that has been connected with higher brain serotonin concentrations and higher birth rates and accelerated growth in humans and animals.

Chickpea Varieties and Archaeological Sites
The oldest variety of chickpea is the desi form; desi are small, angular, and variegated in color. Scholars believe desi originated in Turkey and was subsequently introduced into India where the most common form of chickpea is the kabuli. Kabuli have large beige beaked seeds.

Domesticated chickpeas have been found at several archaeological sites, including Tell el-Kerkh in Syria; Cayönü (7250-6750 BC), Hacilar (ca 6700 BC), and Akarçay Tepe (7280-8700 BP) in Turkey; and Jericho (8350 BC to 7370 BC) in the West Bank. The earliest to date is Tell el-Kerkh, in the late 10th millennium BC, and scholars suspect that since el-Kerkh is a considerable distance from the native lands of the wild chickpea, the domestication took place somewhat earlier than that.

So, the  domestication seems to be Turkish, about 10,000 plus years ago.