Like this surprises me much, I’ve said before that it was older than claimed. At least this map agrees with my points of domestication (I did something similar a few months ago). I’ve always maintained Southern Turkey was the origin point of the Western Neolithic revolution. 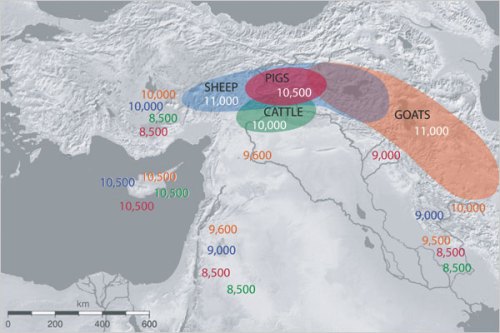 The invention of agriculture was a pivotal event in human history, but archaeologists studying its origins may have made a simple error in dating the domestication of animals like sheep and goats. The signal of the process, they believed, was the first appearance in the archaeological record of smaller boned animals. But in fact this reflects just a switch to culling females, which are smaller than males, concludes Melinda Zeder, an archaeologist at the Smithsonian Institution.

Using a different criterion, that of when herds first show signs of human management, Dr. Zeder finds that goats and sheep were first domesticated about 11,000 years ago, much earlier than previously thought, with pigs and cattle following shortly afterwards. The map, from her article in the August 11 issue of the Proceedings of the National Academy of Sciences, shows the regions and dates where the four species were first domesticated. Other dates, color-coded as to species, show where domesticated animals first appear elsewhere in the Fertile Crescent.

The earlier dates mean that animals were domesticated at much the same time as crop plants, and bear on the issue of how this ensemble of new agricultural species – the farming package known as the Neolithic revolution – spread from the Near East to Europe.

Some experts say the technology spread by cultural diffusion, others that the first farmers themselves moved into Europe, bringing their new technology with them and displacing the resident hunter gatherers.

Dr. Zeder concludes that both processes were involved. A test case is the island of Cyprus, where the four domesticated species of livestock appear as early as 10,500 years ago, replacing native fauna such as pygmy elephants and pygmy hippopotamuses (large animals often get downsized in island settings).

Since Cyprus lies 60 kilometers off the Turkish coast, the suite of agricultural species must have been brought there on boats by the new farmers. That establishes one episode of colonization, and Dr. Zeder sees evidence for several others. The second map shows, in red circles, the dates when farming colonists’ enclaves were set up around the Mediterranean.

Dr. Zeder believes that in France and Spain the indigenous hunter gatherers adopted the new farming technology by cultural diffusion (shown as green dots). The farmers themselves settled the regions that are now Turkey and the Balkans (red dots) but in surrounding areas they integrated with indigenous peoples (blue dots).

Dr. Zeder says her evidence indicates that several waves of settlers spread the new farming technology through the Mediterranean. It’s yet not known what drove the expansion, or what the relationship was between the colonists and the native inhabitants. Studies of ancient DNA, she said, may help test her thesis that farming spread through a mix of colonization and cultural diffusion.

The logic that is used to observe the livestock arriving in Cyprus is similar to my dating of agriculture arriving at Francthi cave; essentially multiple crop plants make a simulaneous appearance in Francthi cave about 11,000 years ago (500 years before cereals are seen).

A nicely dated map/timeline of the expansion of farming (well, it’s a bit out, as Francthi in Greece was 11,000 BP)

One response to “Animal domestication is older than previously thought”