Europe has been influenced by both intra- and intercontinental migrations. Since the Iberian peninsula was a refuge during the Last Glacial Maximum, demographic factors associated with contraction, isolation, subsequent expansion and gene flow episodes have contributed complexity to its population history. In this work, we analysed 26 Y-chromosome biallelic markers in 568 chromosomes from 11 different Iberian population groups and compared them to published data on the Basques and Catalans to gain insight into the paternal gene pool of these populations and find out to what extent major demographic processes account for their genetic structure. Our results reveal a reduced, although geographically correlated,
Y-chromosomal interpopulation variance (1.2%), which points to a limited heterogeneity in the region. Coincidentally, spatial analysis of genetic distances points to a focal distribution of Y-chromosome haplogroups in this area. These results indicate that neither old or recent Levantine expansions nor North African contacts have influenced the current Iberian Y-chromosome diversity so that geographical patterns can be identified. 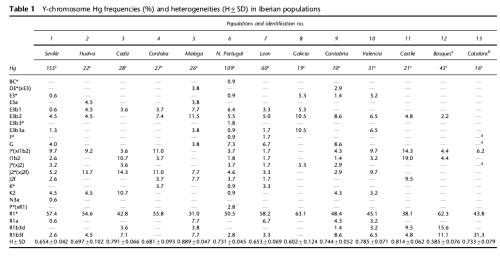 Again, one to study tomorrow! This nice image from another source 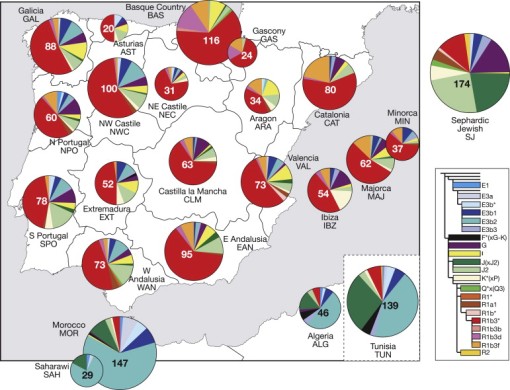