Y chromosomes are against an African origin for Afro Asiatic.

I used to agree with the old Ehret/Kieta model for the E3b1 Y chr as a marker for Afro Asiatic, but its become apparent that all the population movements into the near East involving this Y chromosome are too ancient to be tacked on to any modern language group. A few months of rolling this idea around, and the DNA evidence and dating seems to support an Asian origin a lot better.

Against an African origin-

Once it  became apparent that Omotic as an Afro Asiatic language was dubious, with it being shown to be a language isolate by several linguists- it turned out all the African Afro Asiatic speakers show Neolithic Y chromosome input from the near East, in some cases overwhelmingly. The main examples for this are the Ouldeme and other Chadic speaking tribes in Cameroon, who have tested as having an outstandingly high percentage of the Y chromosome R1b, a Eurasian Y chromosome that fits the spread of Chadic languages like a glove. As far as I can tell, the ultimate point of origin for this seems to be SE Turkey, which is within the origin area of the agricultural Neolithic expansion. So, most Chadic male ancestry traces back to the origin point of the Neolithic, which is a big supporter of an Asian origin for Afro Asiatic.

Another Y chromosome that shows a population movementthat tracks Afro Asiatic is from the Nile delta – the M81 Y chromosome. The advent of this mutation is extremely close in time to the entry of R1b’s entry into North East Africa, and it appears to have spread out into North Africa with the Neolithic farmers, and also as far as Somalia, where it is found at a very low rate, but just enough to confirm a Neolithic movement from North to South along the Nile. 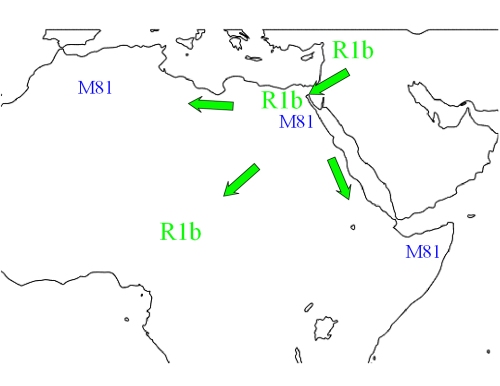 The language and its dates

Mainly my gripes are based on Dr Ehret’s work on AA languages. His inclusion of Omotic as an Afro Asiatic language was always speculative, and now it appears that it shows no more than a chance relationship to the Cushitic languages (Theil). I suspect he was keen to include it as an AA language as it shores up the African origin by providing him a pre agricultural Afro Asiatic language in East Africa- which now seems to be wishful thinking on Ehrets part.

Looking at Dr Ehret’s dates for the Afro Asiatic group, one major flaw leaps out. He dates proto Cushitic at 10,000 BP, which he describes as an African pastoralist language with goats and sheep. This is impossible, as goats and sheep do not enter Africa until 2,000 years after this date.  If it were correct as a date, this would locate proto Cushitic in the North of the Levant. Assuming that the Cushitic branch is native to East Africa, the arrival of ovicaprines to the area is first known about 5,500 BP in the Sudan. Assuming that the Cushitic branch moved along the coastal areas ( the joining dialects between Egypt and East Africa later wiped out by Asian Semitic languages, and a Nilo Saharan block to them in Nubia), a date of about 6,000 BP for the separation of Cushitic in East Africa would be more likely. This casts major doubt on Ehret’s dating methods for all his work, and really casts a big shadow over his dating of technologies by dating the proto language (the basis of most of his claims for early pastoralism in Africa). This would probably mean Nilo Saharan was the indigenous language group of East Africa prior to the Neolithic.

The dates for proto Cushitic mean his 14,000 BP date for proto Erythraic (ditching the older 15k date for PAA as the Omotic Branch is now defunct) corrects to 10,000 BP assuming his rate of miscalculation is stable at 40%. As a minor note, I’ve seen text books place a maximum date of 10k for any language family, which makes me query Ehret’s work on dates for yet another reason. This 10k age limit would also support all his dates being 40% too old, which would also re-date Cushitic to about 6,000 BP- which agrees with my own estimation.

The ancient presence of Semitic in Asia.

Then there is the proximity of Semitic and proto Indo European languages. Numerous agricultural terms turn up in PIE, words for barley, bull etc, that are all suggestive of the Semitic family being present close to the origin point of IE languages when they adopted farming (I’m not ignoring that they may possibly have had the same root dialect at one time). After reconciling the ‘Turkish’ and ‘North of the  Black sea’ origins for proto Indo European (the older IE languages seem to be Anatolian, the last node was ‘Kurgan’) this would place Semitic in contact with older PIE dialects around 9,000 BP. Bearing in mind the age for PAA is needs to be about 10,000 BP for at least two good reasons, this is also not supportive of an African origin for Afro Asiatic. 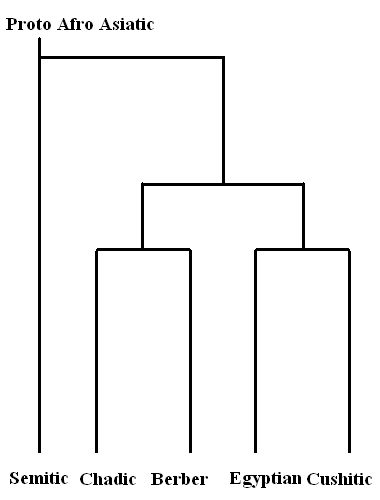 The population movements suggest to me that the African AA languages all came from a common tongue at the Nile delta, and then split up from each other and differentiated very quickly as the pastoralist groups moved away more swiftly than the farmers. This might explain why proto Afro Asiatic has been such a bugger to reconstruct; it’s right on the maximum age, and some of the root words for crops and farming implements etc could have been lost by the rapidly moving pastoralist groups who never grew crops.

The main reason I’ve focused on the R1b is the ‘sore thumbness’ of its presence in central/West Africa, and the M81 because of its Neolithic age and Egyptian place of origin. I’ve steered clear of the J1 and J2 Y chromosomes in this entry, as at present it isn’t very clear what entered East And North Africa in the Capsian, what with the Neolithic and what with the Arabs. J seems to have arrived in  Africa in three waves. Really it needs an in-depth going over by a specialist study to untangle it, but some papers do discuss J arriving into Africa with the Neolithic, and it is seen in East Africa as far as Somalia, so it’s not impossible one minor J hg also matches the distribution of AA languages in Africa too.

25 responses to “Y chromosomes are against an African origin for Afro Asiatic.”