Background: A proportion of ¼ to ½ of North African female pool is made of typical sub- Saharan lineages, in higher frequencies as geographic proximity to sub-Saharan Africa increases. The Sahara was a strong geographical barrier against gene flow, at least since 5,000  years ago, when desertification affected a larger region, but the Arab trans-Saharan slave trade could have facilitate enormously this migration of lineages. Till now, the genetic consequences of these forced trans-Saharan movements of people have not been ascertained.

Results: The distribution of the main L haplogroups in North Africa clearly reflects the known trans-Saharan slave routes: West is dominated by L1b, L2b, L2c, L2d, L3b and L3d; the Center by L3e and some L3f and L3w; the East by L0a, L3h, L3i, L3x and, in common with the Center, L3f and L3w; while, L2a is almost everywhere. Ages for the haplogroups observed in both sides of the Saharan desert testify the recent origin (holocenic) of these haplogroups in sub-Saharan Africa, claiming a recent introduction in North Africa, further strengthened by the no detection of local expansions.

Conclusions: The interpolation analyses and complete sequencing of present mtDNA sub-Saharan lineages observed in North Africa support the genetic impact of recent trans-Saharan migrations, namely the slave trade initiated by the Arab conquest of North Africa in the seventh century. Sub-Saharan people did not leave traces in the North African maternal gene pool from the time of its settlement, some 40,000 years ago.

I haven’t read the whole paper through yet, but just from reading the bit I put in bold.. I’m sure that a paper on ancient Guanche mtDNA showed an L haplotype or two present which meant they had to be present a few thousand years ago during the colonisation of the Canary islands.

The majority of lineages (93%) were from West Eurasian origin, being the rest (7%) from sub-Saharan African ascription

And a very ancient age for L6 crossing over into Spain (about 20 kya) from another paper. So I’m going to state emphatically this can’t be correct. Not to mention that the ceramic using Saharan Negroid ’roundhead’ population reached as far as the Acacus mountains (about 10,500 bp) and would have had some contact/gene flow with the coastal Capsians (who were  a near Eastern /Mechtoid mixed people from the cranial studies I’ve seen and the expansion dates of Y chr J1 and H mtDNA). Although  the majority of the L haplotypes in North Africa are due to the slave trade, they can’t ALL be.
Edit:

I read through this this morning. The most interesting bits of the whole pdf for me were…

Clearly, the main component of the West Eurasian lineages was made of possible Iberian
expanded lineages following the post-glacial climate improvement: H1 (12.35%), V (9.88%)
and U5b (1.23%).

I’d debate the 14k age for this given in the paper… but they had to have arrived before the Taforalt people died as the H, HV /V turns up in those 12k old samples..

A few L3 sequences observed in North Africa have older co-ancestry with other sub-Saharan
regions, but as this occurs in the rarer haplogroups (almost restricted to East Africa), most
probably the scenario will change as these become better characterized. This is the case for
one L3x2 sequence observed in Algeria, which shares an older most recent common ancestor
with two Ethiopian, one Israeli and one Kuwait, at 33,165 ± 4,499 years ago, but one
Ethiopian and the Israeli and Kuwait sequences share a younger ancestor at 19,012 ± 4,200.
Also, one Egyptian L3f2b sequence shares an ancestor with a Chadic one at around 24,809 ±
5,935 years ago. For L3h1a2 haplogroup, one Egyptian and one Lebanese sequences share a
coalescence age of 26,281 ± 6,139 years old. And for L3h1b, with an age of 36,827 ± 3,772
years, one of the North African sequences (one Tunisian and one Moroccan) has a most recent
common ancestor of 14,766 ± 4,448 years old with a sequence from Guinea Bissau.

I’ve been looking for mtDNA that could have accompanied the M78 out of Africa (arriving in the near east and NW Africa about 22k ago). While M1 obviously fits that date, it’s nice to see that some of the L3 dates aren’t incompatible with the m78;  being found in Natufian areas of Israel and Lebanon. The Israel/Kuwait/Ethiopian L3 may be a back-migrating L haplotype, not incompatible with the return of M1 and U, or another haplotype caught up in the Lower Nubian expansion and fanned out into the same areas as the m78/M1.

So far, the two only complete published samples belonging to haplogroup L3k have a North
African origin, one from Libya and one from Tunisia. This haplogroup has a coalescent age of
around 29,251 ± 6,524 years old

Who/where did that come from?

But the most useful thing in the whole paper are the maps, which give a quick over view of L distribution in Africa. I’ve reworked this one in colour, as the original is a bit hard to make out in places.

One of the interesting patterns I noticed was the (quite possibly superficial) relation to the expansion of non-L haplotypes and L3h in E/SE Africa. Also the hotspot for L3h in Northern Sudan, makes me wonder if it may not have been a travelling companion to the non-African mt DNA’s at some time. Unlike Maju, I’d say this looks like it has an origin on the Nile rather in Ethiopia, as it seems to have a relation to the expansion pattern of the M1/M1a/m78  from Lower Nubia/Egypt. 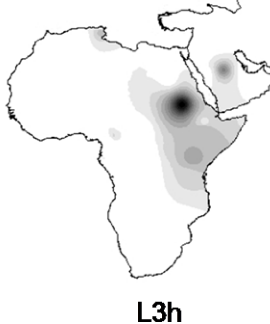