The Aurignacian domestication of the dog. 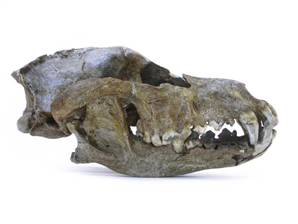 A few months ago during my reading up on domesticates, I posted a piece on how the mt DNA of modern dogs was 15,000 years old and traced back to China. Well, it seem that this was premature, or at best only half the picture. A study of mulitple ancient canid remains concluded that one Belgian specimen from Goyet wasn’t a wolf, but was sufficiently different to be recognised as a dog. At a staggering 31,700 years old. The oldest domesticated animal known, as far as I know at least. Prior to this the oldest domesticate was also a dog, but Russian and 14,000 years old.

The Paleolithic dogs had wider and shorter snouts and relatively wider brain cases than fossil and recent wolves. They are described as-being Husky like, but the size of large shepherd dogs. A real mans dog. I’m guessing it’s main functions were hunting and guarding the home.

From what I’ve read of the Belyaev foxes, it only takes 20 generations to fully domesticate (10 to usable levels) a wild animal.

The discrepancy between the mt DNA and the fossil evidence (don’t get me started) is explained by this publication; Ancient DNA supports lineage replacement in European dog gene pool: insight into Neolithic South-East France, which suggests that the older Mt DNA lineages have a very different frequency, and suggesting that some were lost altogether, saying that..

Altogether, these results support the proposition that palaeogenetic studies are essential for the reconstruction of the past demographic history and the domestication process of dogs.

Which would explain why their mt DNA seems to have ‘got lost’. Prior to this I put down claims of Aurignacian dogs as a bit far fetched, but it seems they may be true. One passage, that I’ve lifted straight from John Hawks, read..

Ancient, 26,000-year-old footprints made by a child and a dog at Chauvet Cave, France, support the pet notion. Torch wipes accompanying the prints indicate the child held a torch while navigating the dark corridors accompanied by a dog

Apparently he’d never heard of this either, which means the rest of us shouldn’t feel bad about not knowing it.

This entry was posted in Uncategorized and tagged dog, domestication. Bookmark the permalink.

14 responses to “The Aurignacian domestication of the dog.”